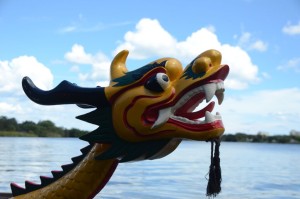 Traditionally held on the fifth day of the fifth moon on the lunar calendar — late May to mid June on the solar calendar (June 3rd this year) — the Dragon Boat Festival commemorates the life and death of the ancient patriot-poet Qu Yuan who lived from 340-278 B.C.. Qu Yuan was a minister who advocated reforms in his home state of Chu. The King refused to listen to Qu Yuan’s advice and instead banished him from the state of Chu. In exile, Qu Yuan wrote poetry expressing his concern for his country and people. In 278, when Qu Yuan heard that his home had been invaded, he drowned himself in the Mi Lo River.

The people of Chu rushed to the river to rescue him. Too late to save Qu Yuan, they splashed furiously and threw zung-ze, steamed rice wrapped in reed leaf, into the river as a sacrifice to his spirit and to keep the fish from Qu Yuan’s body.

Dragon boating takes place in a 40’ long, 4’ wide canoe-like boat that seats 20 paddlers – two paddlers to a row, with a steersman in the back and a drummer in the front to keep cadence. During races, these boats are adorned with an elaborately painted dragon head and tail. When fully loaded, the paddlers are pulling approximately 4,000 pounds.